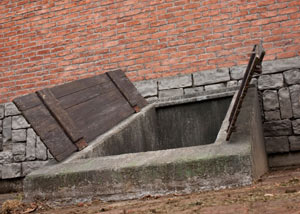 Leaking hatchway doors are a nuisance for homeowners who'd like their basement to be dry -- especially in a finished basement.

When you waterproof your basement, you'll want to be able to count on it to be dry -- and to stay dry from that point on. If your basement is flooding from the stairs and hatchway entryway, then the job is not done.

Hatchway entrances are typically constructed separately from the foundation walls. This entryway is usually designed as a concrete shell that's bolted on to the foundation walls after they're built. Often, stairs will come already built into the pre-cast entryway.

After the hatchway is installed in place, metal doors are fixed on top. If necessary, the stairs are built inside, and the construction is completed. These hatchways are usually not sealed to the foundation walls.

Our solutions install quickly and are backed by a written lifetime warranty! To schedule your basement waterproofing quote free of charge and with NO obligation, contact us today! We serve throughout Minnesota, North Dakota, Iowa, and Wisconsin, including Rochester, Minneapolis, Fargo and many surrounding areas nearby. 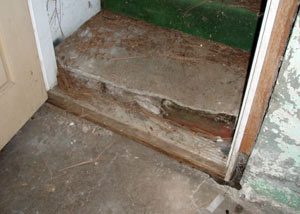 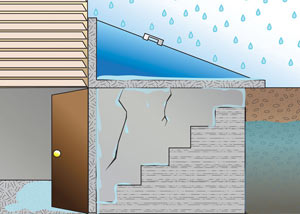 (Above) A hatchway entrance constructed separately from the rest of the home. This makes it vulnerable to flooding from many different areas.

Metal hatchway doors are not flush with the concrete frame they're attached to. As rain builds up on the doors, it will slide down the doors and pool on the concrete around the edges of the doors.

From this point, the water has two paths that it can follow -- it can either continue to flow down to the ground, or it will slip underneath the metal hatchway door and onto the stairs inside the hatchway.

2. Where The Hatchway And Foundation Meet

Because it's rare for this joining point to be sealed by the contractors, it is a major weak point where water can flood through to your basement.

As groundwater builds up around the foundation during a rain event, it presses in on this weak spot and allows significant flooding.

3. Through Cracks In The Concrete

Like any concrete structure, a hatchway entrance will begin to form cracks over time. Water will flood through these cracks, move to the stairs and end up flooding into your basement area.

Some old-fashioned hatchway doors were built with loose panels of wood (instead of metal), with little or no attempt to keep water out. Water easily floods through the gaps in these doors.

Once water builds up in a hatchway entrance, the puddles will expand into the basement. 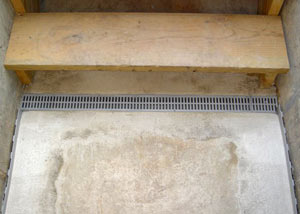 The TrenchDrain™ system is designed with a grated opening on top that collects water and sends it to your perimeter drain.

Meant as part of a perimeter drain system, it's a great way to keep hatchway flooding out of the basement, and away from your furniture and belongings.

No matter how water is flooding into your home from the hatchway doors, our TrenchDrain™ Hatchway Door System is a great way to keep it out of your basement space.

The TrenchDrain™ is designed with a half-round pipe section, with a grated top fitting. When installed, it's flush with the rest of your concrete floor for a clean, professional job.

The TrenchDrain™ is meant to be used as part of an existing perimeter drain system. It spans the staircase, collecting water that spills down and directs it to your drain and sump pump system. This system can span the entrance of the hatchway, or can be extended inside the hatchway itself.

Other Uses For TrenchDrain

TrenchDrain is fully compatible in homes that have a radon mitigation system installed. A simple ball-and cup mechanism seals the drain when not in use.

We also sometimes recommended this system for use along garage doorways, as well as for other entrances where water may intrude into your home.

We Can Stop Your Hatchway Door From Flooding Your Basement!

Whether your hatchway doors are leaking or you have some other basement flooding problem, your local waterproofing experts at American Waterworks have the solution you need. From leaky hatchways to flooding floors, iron ochre issues, wall cracks, or even ugly basement windows, we have it all!

We'd like to meet with you and show how we can make your basement dry -- all the time! Contact us today to schedule your free basement waterproofing quote!

Each free quote comes at no obligation and includes an on-site inspection, personal consultation, and free written cost quote. We'll also send along a complimentary copy of our full-color waterproofing book!

We serve the Minnesota, North Dakota, Iowa, and Wisconsin area, including Minneapolis, Fargo, Rochester and many nearby areas.