A customer from Devils Lake, ND, gave us a call when she began to suffer from unwanted water entering the basement of her home. When she called in, we set her up with our FREE estimate, which entailed our Fargo-based Design Specialist, Ian, going to her property to conduct a thorough inspection into the issue. Once he completed his walk-through, he was able to make a few recommendations as to how we could best help her fix the issue. Ian wanted to focus on giving water entering the space the proper place to flow. He recommended she allow us to install our WaterGuard drainage system. He explained that this system is designed to be installed below the floor slab, resting on top of the foundation footing. This keeps it out of the "mud zone" where other drains could clog. This drain system collects water entering from wall cracks, pipe, or wire penetrations, and any leakage through basement windows. Our customer agreed to Ian's recommended course of action and work began shortly after. Our Fargo-based Foreman, Cameron, and his team were able to make quick work of the project. They began by jack hammering away at the perimeter of the basement. Next, they laid the drainage system. To finish, they covered the drain in a fresh coating of concrete to seal it in place. When the project was completed, our customer was delighted to know that her basement waterproofing issues were in the past! 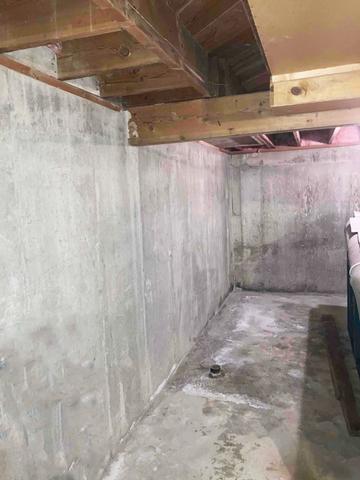 Our customer was suffering from water entering her basement, causing damage to the concrete and surrounding walls as pictured here. 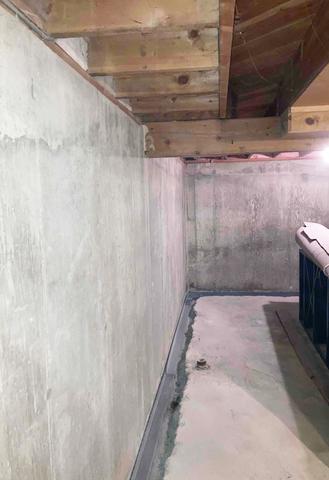 Our crew began the project by jackhammering the concrete surrounding the perimeter of the basement to lay the WaterGuard snugly against the wall. 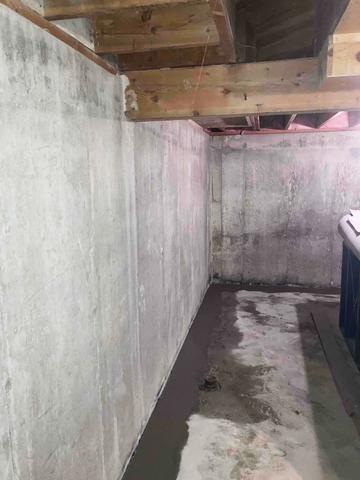 When the crew finished laying the drainage system, they covered the system in a fresh layer of concrete, sealing it in place.

Back to Previous Page